For those of you that have taken the time to check out this blog, I thought I'd mention what I've been up to. This adventure in writing started out with the occasional blog post about my past experiences and some short stories, but then an interesting thing happened on the way to the keyboard. 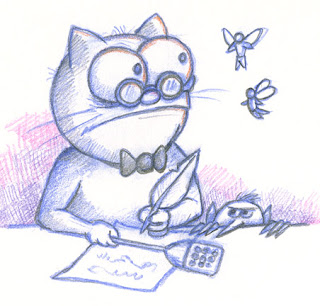 One of my short stories took on a life of it's own. It was just supposed to be a simple funny story about pixies, I was never planning on expanding it, but once the characters were invited in they would not be ignored and no matter how many times I swatted them away and told them to wait they wouldn't take “no” for an answer. Like high pressure car salesmen they kept asserting themselves at every opportunity until I gave in and acknowledged them.

Pulling the characters aside, I had even patiently explained to them, that yes, I was planning on writing a novel but it couldn't be about them. I already had an idea, it had formed years before I knew they existed. I showed them the outline and the partially written first chapter and insisted that they take a number and wait... I couldn't possibly quit and start on their book, that would just be silly.

Then before I knew it, something happened. I'm not able to recall what it was exactly, but I put the original book aside and started to tell their tale. I don't know if they put a compulsion spell on me or if I was afraid of being severely bitten by a nasty goblin, but I started writing everything down.

Given the green light to go ahead, the original characters from the short story eagerly explained to me what was going to happen next. I didn't force them to act a certain way and to do anything they didn't want to do. I wouldn't have been able to even if I had tried, apparently they had already made up their minds on how things should be and I wasn't going to be able to persuade them otherwise. They made it clear that my job was to write down what they said and did.

This was a strange feeling for me. I have never had a creation take charge before to such an extent. And amazingly it wasn't only the initial creatures that did this–new souls began to appear. Forming out of the nothing, one by one they came, introduced themselves and then took their places in the pages.

So that's where I've been since the last post. I've been following a story and trying to commit it to paper. As of this post, I have written two novels and I am currently working on a third. All of which still seems incredible to me since I wasn't even planning to do this in the first place. It was just going to be a silly little short story.

And it hasn't been a chore. It has been enjoyable to write for them and I will continue to do so until they decide to leave. The fairy folk never tell you their plans–it could be at any minute or maybe never and I'll stick around because I'm curious to see how much more they have to say.

As for you, dear readers, I do not know what will happen in the future as far as the distribution of these stories is concerned and if you will ever get to read them, but I hope you do get to meet these characters for yourselves one day. Keep a look out on this blog for announcements, previews and whatnot, because you never know, perhaps one day they will be in a bookstore near you or online. Or at the very least, you'll get to read the original book that I had planned before these guys came along and insisted I stop.
News Story Writing 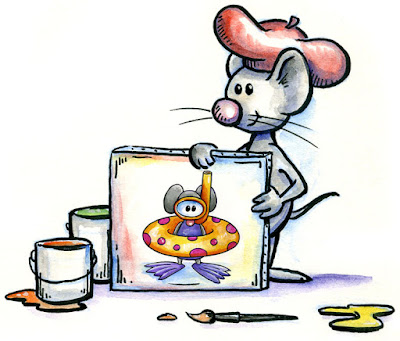 OK Folks, I've been working with Kimmie at Kraftin' Kimmie Stamps providing some illustrations. So I'm taking part in the Blog Hop. If you came here first and you want to start at the beginning, then go to the Challenge Blog first. After you check out my illustration, you will then hop over to the very talented Elaine Hughes Quixotic Cards Blog. Also in case you haven't seen it yet here's the all the information you need if you wanna buy some of these great stamps: Today Kraftin’ Kimmie Stamps is releasing their new June images! As you’ve seen over the last few day in our Krafty Peeks, Annie Rodrigue has created the MOST MARVELOUS MERMAIDS! They are part of our Summer Mermaid Kit which includes SIX stunning Mermaid images, SIX matching accessory stamps (plus a few bonuses) and a coordinating Mermaid Sentiment set with over 20 perfect phrases!! This kit is only available as a set and only at the Krafin’ Kimmie Shop for a limited time! We are also THRILLED t
Read more